I watched Stanley Kubrick’s Full Metal Jacket recently for the second time.  The first time I watched it was more than a decade ago at least, so my second viewing was almost like seeing it for the first time.  I did, of course, have vague memories of the training sequences and I remembered Private Pyle shooting himself, but I didn’t remember much of the rest.  This apparently is very common among those who have seen this movie.  Most people say that they like the first part of the movie (the boot camp and training) but either forget or don’t like the rest.  After my second viewing, I found myself reflecting more on things that happened in the second half than the first.  There are also very interesting bits of foreshadowing that happen in the first half that we see play out in the second that are worth looking into.  Here, however, I just want to point out a few things that I noticed this time around without too much theorizing.

Two of my favorite movies, The Shining and Eyes Wide Shut, are also Kubrick movies.  After delving into hidden meanings, symbolism, staging, etc. present in both of these movies, I wanted to watch another one of his films that I hadn’t seen; so I chose Full Metal Jacket since it would seem fresh to me.  Full Metal Jacket was made between these two movies (something that I think is relevant) in 1987.  I went into the movie with Eyes Wide Shut on the brain.

The most striking similarity between Eyes Wide Shut and Full Metal Jacket is the theme of sex, but Satanism can also be seen in both.  The first hint of Satanism that we get is very hard to notice since it’s written in Vietnamese, but Rob Ager has shown that a certain phrase written on what looks like some type of water tower translates to the following strange phrase: ”to continually serve the devil, your excellency.”

Later, when Joker sneaks up behind the sniper, we see a Viet Cong flag draped over a railing, the star pointing downwards like an inverted pentagram, fire burning below it (there are also inverted pentagrams in Eyes Wide Shut). 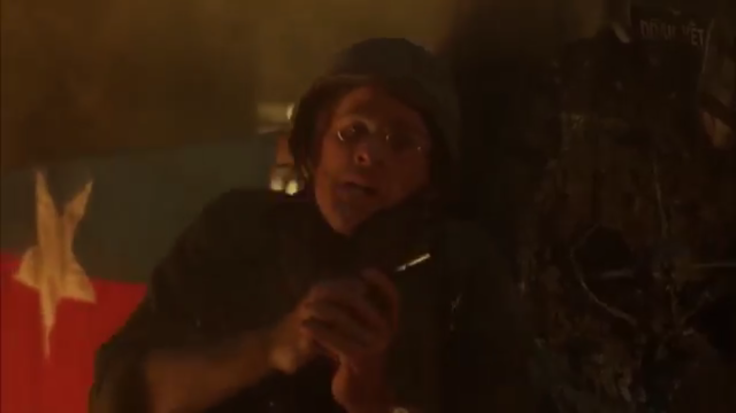 The sporadic fire burning here and there in this scene is also reminiscent of hell in a way.  Hints of Eyes Wide Shut come through in this scene as the five soldiers (five points of the pentagram) almost circle around the dying woman (the upside down star is blocked by the soldier on the right in the picture below but can be seen in this scene).  It almost feels like a human sacrifice.  The woman also breathes in a way that could be heard as a woman having sex.  Eyes Wide Shut has the famous scene of women encircling a man performing a satanic ritual before an orgy erupts.  Eyes Wide Shut is about a satanic elite who is made up of the most powerful people in the world.  If you knew who they were, you wouldn’t sleep so well at night.  Could this satanic elite be creating wars such as the war in Vietnam? 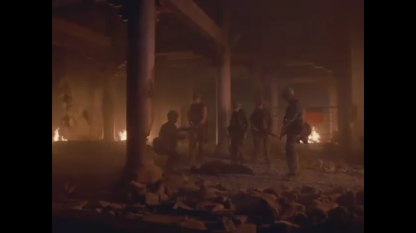 It is also interesting to note the meaning of the title “Eyes Wide Shut,” meaning that we don’t see what is really going on around us.  This idea shows up also in The Shining in the name of the hotel: The Overlook Hotel.  “Overlook” can mean to miss something as well as to see all of something.  This also comes through in the way that the public sees the movies.  Both Full Metal Jacket and Eyes Wide Shut are known for certain parts only and people overlook or forget about the rest of the film.  The boot camp part of Full Metal Jacket and the orgy scene of Eyes Wide Shut are what most people remember about these movies, and Jack Nicholson’s axe through the door has become the definitive scene of The Shining.  This is also shown in Full Metal Jacket when the troops are doing burpees while Private Pyle sucks his thumb on a table.  While the troops count out reps, two troops stop doing reps, but most of us don’t notice.  (I didn’t notice this all on my own but it helps with this point.)

Also, the way the first hooker we see in Vietnam behaves is very similar to the way in which the two models act at the first party in Eyes Wide Shut while they attempt to seduce Tom Cruise’s character.  They never stop moving their bodies around and almost seem like snakes.  There are some interesting differences though in these two scenes.  First, the Vietnamese hooker is very vulgar and explicit while the two upper-class white women seducing Tom Cruise rely heavily on innuendo.  She also moves less gracefully than the two women in Eyes Wide Shut, almost jerking around, speaking poor English and eventually coughing.  Second, in Full Metal Jacket, we see one woman trying to seduce two men, while in Eyes Wide Shut, we see two women trying to seduce one man (similar to the flipping of the sexes described in the murder of the sniper and the satanic ritual described above). 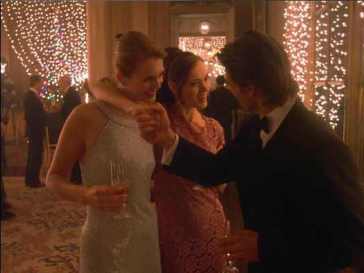 Finally, money is needed with the hooker while money is not even mentioned with the two aristocratic ladies.  I’m not sure what this could mean but I’m sure that it is something worth making mention of since it is often noted that Kubrick’s films seem to interlock and he likes to make use of mirrors and reflections, doubles and pairings.

One pairing seen in Full Metal Jacket is that of Joker and Cowboy.  They are shown in the same frame often throughout the movie, sometimes in a way that makes them look very similar. 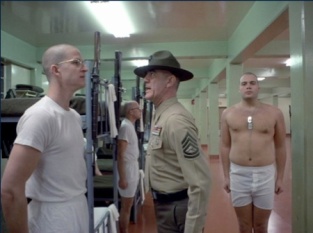 They also are they only people who wear glasses.  Both of these facts seem to link them in some way.  They are also shown divided at times.  Pyle was standing between them when he was caught with his donut, and the Drill Instructor stands between them when they are marching with their rifle while grabbing their crotch (Joker’s head is blocked in the picture below by the DI’s hat, but he is visible in this scene).  Here we have two friends who appear to be copies of one another at times and yet something divides them.  What is it?  Perhaps the death of Cowboy by the sniper at the end. 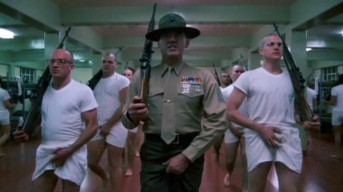 The death of the female sniper at the end, the last Vietnamese woman we see, also relates to the first Vietnamese woman we see, the hooker.  When we see the hooker, we hear the Nancy Sinatra song “These Boots Are Made for Walking.”  Many people have pointed out how the lyrics of this song can be interpreted as Vietnam addressing America.  The first woman we see has the potential to kill the American soldiers by either being an undercover Viet Cong or with a disease.  The last woman we see also has the potential to kill the American soldiers with her gun and she does kill some of them.  The first lyrics to the song that we hear, before the song fades a bit, are:

“You keep sayin’ you’ve got somethin’ for me,

Somethin’ you call ‘love’ but confess

And now someone else is getting’ all your best.

These boots were made for walkin’

And that’s just what they’ll do,

It seems that this song is foreshadowing of what’s to come (the female sniper killing male soldiers), but we see that the Vietnamese hooker isn’t wearing boots – the American soldiers are (see picture above).  In the end, their boots do the walking, and they walk all over the female sniper.  This almost seems to show how pathetic women’s empowerment can be.  Imagine a woman pumping herself up with Nancy Sinatra’s song and imagining some sort of retribution, singing that last line cited above to herself.  But what can she really do?  She can “empower” herself with slogans and protests at one end of the spectrum; the extreme option would be to do what the female sniper did and kill men, but even that didn’t seem to work out for her in the end as she lay on the ground repeating “Shoot me.”  Was Kubrick trying to show that Feminism can be silly, unthreatening, and futile in the real world?  It may seem like there is no connection between Full Metal Jacket and feminism, but keep in mind that the sixties were the time of sexual liberation, assassinations, feminism, and the Vietnam War.

One last thing I noticed, but don’t know what to make of, is the toothbrush ads seen in the movie.  There are some Vietnamese signs in the background that translate to “plaque” and there are pictures of a smiling Oriental man on buildings.  Also, in one of the propaganda news room scenes, the public affairs officer says that he wants stories about “grunts who give half their pay to buy gooks toothbrushes and deodorants….”  Now this could be nothing at all, but I don’t believe that there are any accidents or incidental things in a Kubrick movie, especially one of his last three movies.  Perhaps this has something to do with an actual event or practice that was going on at the time (i.e. maybe dentistry was rapidly growing in Vietnam).  Maybe it is meant to show that the Vietnamese were dirty in the eyes of the Americans – although they likely were, especially in the rural areas.  Maybe it has a connection to oral sex, something referenced many times in the movie, from the Drill Instructor in America to the hookers in Vietnam (sex is a running theme in this and other Kubrick movies).  If anyone has any ideas or information, don’t hesitate to let me know.